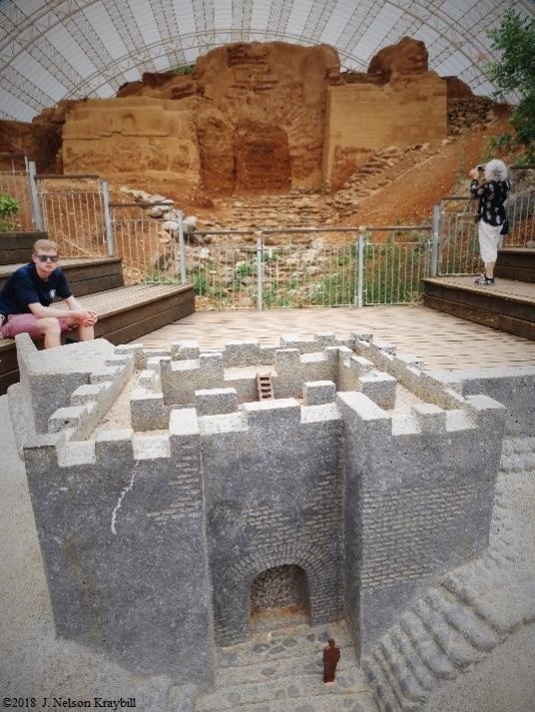 “At that time the Canaanites were in the land.” With that casual aside, the biblical account of Abraham and Sarah arriving in Canaan states that the territory already was populated. “To your offspring I will give this land,” God told Abraham (Gen. 12). Today near the northern border of modern Israel there’s a mud-brick Canaanite city gate built about 1750 BCE—approximately when Abraham and Sarah arrived. Did they go through this gate? Did they know that their descendants someday would dispossess Canaanites of life and land?

Made of mud bricks, the ancient gate today stands under a hangar-like canopy for protection. A small model nearby shows how the gate effectively was a fortified building with a central passageway. Descendants of Abraham and Sarah, after a 400-year detour into Egypt, returned to conquer Canaan with swords and claims of divine mandate. Entire Canaanite cities perished. That must have been brutal for indigenous people, and raises serious ethical questions.

Today conflict still simmers, this time between Jews and Palestinians, who both trace lineage to Abraham. Most Palestinian descendants of Abraham are Muslim, and many likely also have Canaanite DNA. The Palestinian population includes the largest group of Christians in Israel and the West Bank. These followers of Jesus are not fully accepted by Jewish or Muslim majorities, and I give them (and all Palestinians committed to peace) my support. Since my Christian faith springs from Judeo-Christian wells, I also am deeply drawn to Judaism, and call on Israel to act justly.

While Jewish Israelis have suffered substantial casualties since becoming a nation in 1948, Palestinian loss is far greater. A 2016 book by Daniel Gordis, Israel: A Concise History of a Nation Reborn, helps me understand the roots of Zionism and Israeli aggression. Jews suffered staggering losses through centuries of mistreatment, often at the hands of “Christians,” culminating in the Holocaust. Anti-Semitism is rising in Europe and North America, and certain Middle Eastern nations still vow to destroy Israel.

None of this painful history justifies what too often happens today in the West Bank. Hundreds of thousands of Jewish Israelis have settled in the West Bank on land belonging to Palestinians. That is a violation of international law. Morally and ethically it makes Israel less secure. People of conscience around the world should protest this violation, even as we acknowledge our own sins. I own Indiana land stolen from Pottawatomie people just as surely as Jewish settlers have taken land from Palestinians.

Some religious and political progressives reflexively condemn Israel, while some Christian conservatives reflexively support everything Israel does. Neither extreme is acceptable. Especially for outsiders, humility is in order–but we must speak for just treatment of all peoples.

I want safety for both Jews and Palestinians, and all who are committed to peace. I do not support Jewish settlements in the West Bank, nor do I advocate strategies that shame and isolate. A wounded psyche is likely to respond with more hostility and violence. Instead, I want to build relationships with both Jews and Palestinians, and stand in the prophetic tradition of Isaiah and Jesus. Both loved Jerusalem, but wanted its gates open to become a “house of prayer for all the nations” (Isa. 56; Mark 11). Today that would include access and safety for Jews, Palestinians, Muslims–and even Christian pilgrims like me.

Experience the “fifth Gospel,” the lands where so much biblical drama unfolded! Join Audrey Voth Petkau and me for a “Journey of Hope” tour of Jordan, Palestine and Israel on September 12-23, 2019 (https://www.tourmagination.com/tour/2019-jordan-palestine-israel/ ). In Jordan we’ll learn about the Israelites’ trek toward the Promised Land as we visit World Heritage site Petra and survey Canaan from Mount Nebo. We’ll see the site at the Jordan River where God parted the waters, and Machaerus fortress where John the Baptist died. In Israel/Palestine, we’ll learn about the life and times of Jesus in a replica of first-century Nazareth. We’ll sing carols at Bethlehem, sail on the Sea of Galilee, view Jerusalem from the Mount of Olives, visit multiple sites in the Holy City itself, and see Caesarea where Peter shared the gospel with Cornelius. Reflect with others on themes of mission and reconciliation–including justice issues of Israel and Palestine—as we travel and worship together.
A second tour on June 10-20, 2020, similar to the above, can be paired with a stop in Germany for the Oberammergau Passion Play. See //www.tourmagination.com/tour/2020-jordan-palestine-israel/